On Friday morning I used the delay on my coffee maker for the first time, set at the completely ridiculous brew-time of 4:15am. The pitch-black drive on an empty interstate and overwhelming feeling of excitement and nervousness added to the surrealness of the experience; it felt more like I was headed to the airport, about to depart on a month-long European adventure, than what I was really doing, driving to St. Olaf to be an extra in A Serious Man.

At the exit for Northfield there was a bizarre mimicking of the scene in Field of Dreams, with a line of hundreds of cars all driving toward the same place, headlights cutting through the dark in perfect unison. Once parked in a far-away lot, all the extras were shuttled to the abandoned science building where the day's scene was to be shot. We were ushered into a large lecture hall, "Extras Holding" posted above the entrance. After being divvied into groups we were sent to get our wardrobes, change, and come back for hair and make-up. This took approximately three hours.

There were roughly 120 "physics students" lounging about the lecture hall, all with extremely high-waisted pants and skirts. Lots of plaid and yellow ochre. Nerds galore. Big hair caused the place to reek of hairspray. I snuck out of "holding" as much as possible to snoop around, checking out the adjacent lecture hall where we would actually be shooting the scene. The Coen brothers were wandering around as well; I went in the breakfast buffet line behind Joel.

The actual shooting finally began around noon. We lined up and were assigned seats as we came down the center staircase in a smaller classroom. I was put in the third row, maybe four seats from the center, a good location. In the front of the classroom a chalkboard spanned from floor to ceiling, every inch covered in equations and theories. The scene is this: the main character, a college professor, is having a dream about teaching a large lecture and amongst the students is his nemesis. As he finishes giving the lecture the students leave and the seated man stays behind; they have a conversation and ultimately the main character gets his head smashed into the chalkboard. Unfortunately the head-smashing took place after we, the students, left, so we didn't get to see any action shots.

I was amazed at how much went into one scene. Fourteen hours, and they weren't even done shooting the parts that didn't need extras when we were cut. They shot the scene about a dozen times from the back and again from the front. I won't get to be in the shot from the front, they did a narrower view and I wasn't so lucky to be seated in the front row. Too bad, since I'm sure I wouldn't have to have been told by Ethan Coen twice to avoid looking at the camera like some other kid.

It was great fun though; a once-in-a-life-time experience, trite but true. And I know the scene won't get cut because it has the line, "I'm a serious man."

I wasn't supposed to take pictures, but luckily I'm sly.


Lecture Hall filled with extras, lined up the aisles to get their hair and makeup retouched. 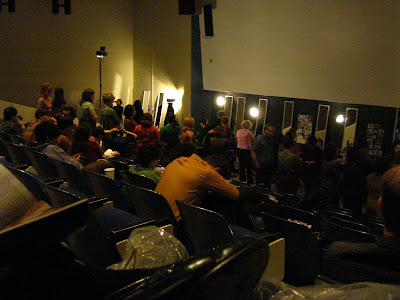 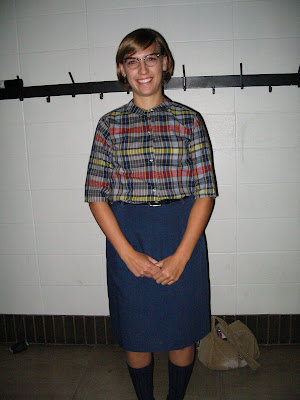 I could have stolen Joel Coen's jacket! 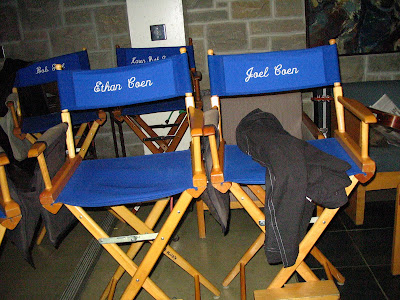